Ethan Graham directs ‘Swallow’. This film premiered on Directors Library on the 25th of March 2020. 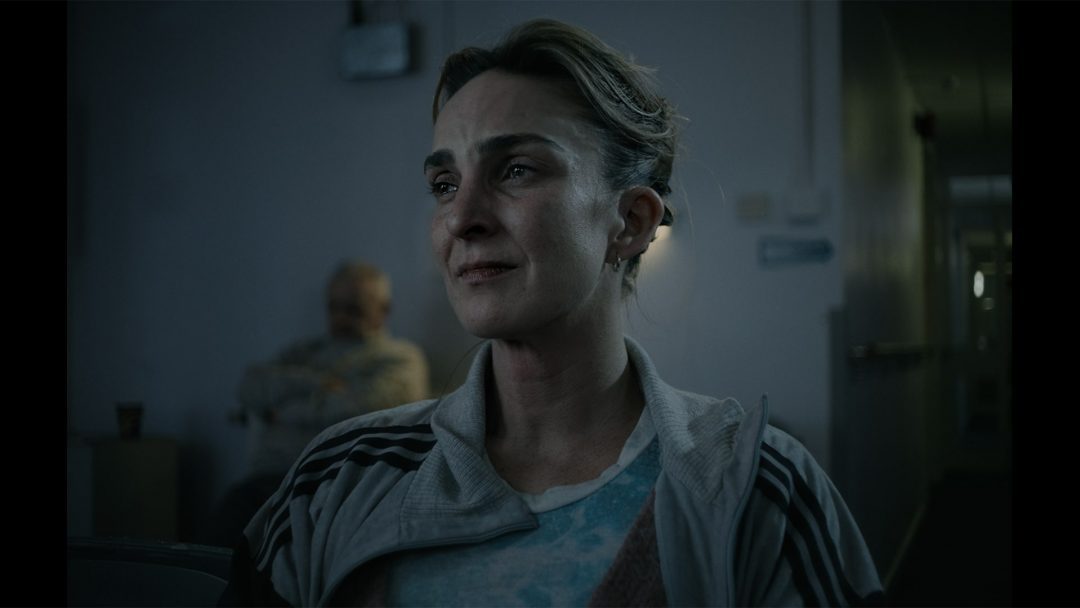 Ethan Graham: They say, ‘Grief is to mourning like infancy is to childhood’ and that although it is the harsh beginning, it’s not the entire course of events – just where the mourner confronts the initial reality of loss.

This just-shy-of-fifteen-minute film takes us on a journey of understanding the process of grief and how on the lead up to death, one’s life becomes forcibly recalibrated – to the point where nothing makes sense. The film plays out using a single shot of Paula, our main protagonist amidst the hospital waiting area where her mum lies – awaiting her fate…

Entirely narrated by Paula, we delve into the fond memories of her Liverpudlian, working-class childhood that consisted of Tunnocks Tea Cakes and summer holidays in Snowdonia. We flit between these memories and her current discombobulated thoughts on parenthood, and how she’s struggling with motherhood herself… The pressure of juggling her time between her teenage daughter, Tilly – the cinema trips and Japanese Sushi restaurants that she really can’t afford and her dying mother.

Although the film was made last year, before the COVID-19 outbreak, it feels timelier now than ever as many are sat waiting for news of their loved ones…

In these unprecedented times of global suffering and panic, the notion of feeling alone and scared isn’t among the few, but the many… As a nation, we’re feeling more isolated and left in the dark than ever before… 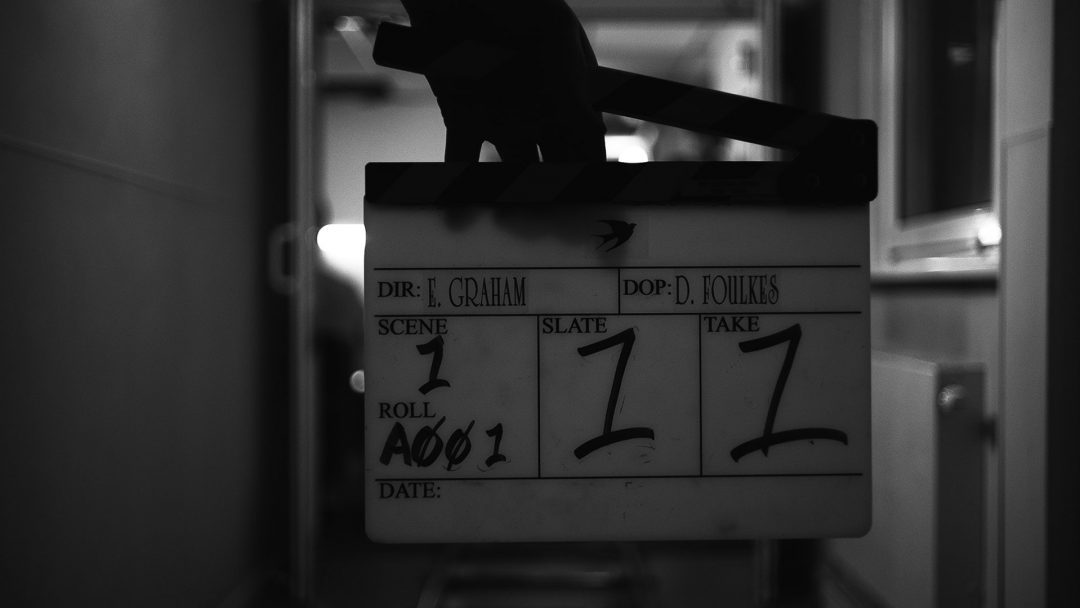 Ethan Graham: How the script came about… My DOP (David Foulkes) found himself at a house party where Kate (Paula) asked him to shoot her self-tape for a play she was working on – that self-tape happened to be a segment of Swallow! Written by the young, scriptwriter-extraordinaire Freya Hannan-Mills the script was modeled around true events… David knew I needed to see this script so later that morning we met for a pint (or few) and worked on the script. Later Kate joined and there we had the makings of Swallow…

A one-shot, combined with a miserable budget of £500 between us (what we could instantly muster up as a group of freelancers hah) and a three-day turnaround we got to work immediately!

The first job we had was to find a location and knowing our budget was far too low for any location sites, we needed to get creative. Mine and David’s main objective when working together is always to find the most perfect location – If a location doesn’t work, it doesn’t matter how great the camera or lenses, costume, contributor even… It won’t be right for the storytelling aspect of the film. 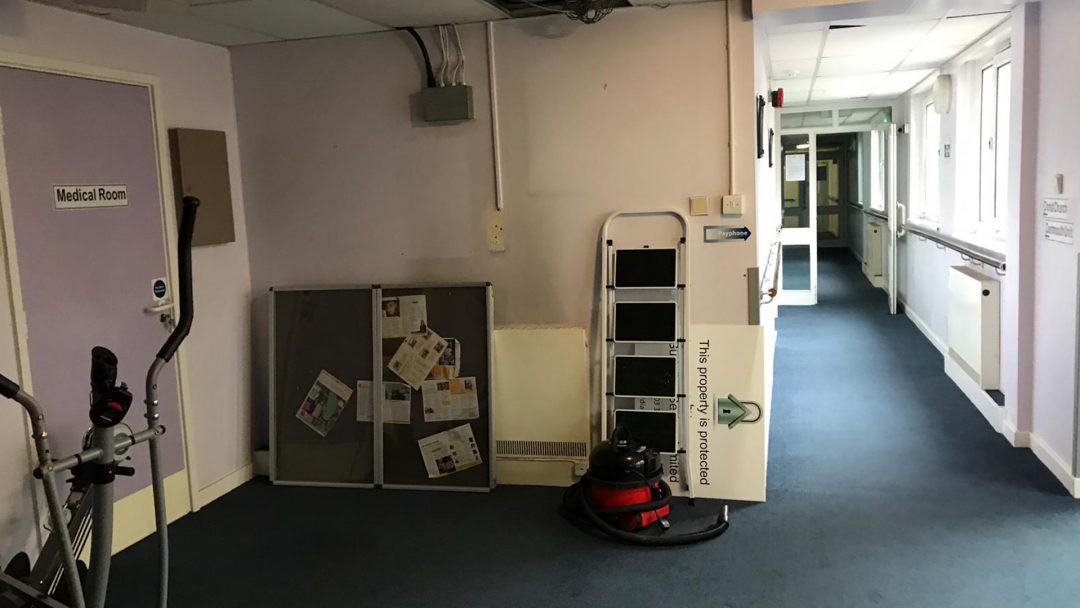 After securing the location (an old care home turned guardianship housing project that we found through our close friend James), myself and David went on to add a bit of Art Direction – Fully embracing the low-budget nature of the project which really took us back to our roots and made the process a really fun one!

From there we had a rehearsal with Kate which allowed me to push her emotionally and really bring out the harsh realities of the words and their meaning… I was nervous going into this because I knew so much relied on Kate’s performance and her ability to take Paula’s little idiosyncrasies and Liverpudlian colloquialisms and turn them into a near-fifteen-minute emotional piece. After two run-throughs, she nailed it – better than I could have even imagined.

The day of the shoot came around and we had about four hours from setting-up to a hard out… So luckily David had done some amazing lighting plans and everything was still fresh from mine and Kate’s rehearsal! In those four hours, we only did four takes and Kate didn’t veer off script or falter once. It was an eye-opening experience to work with someone so talented and passionate about what they do! 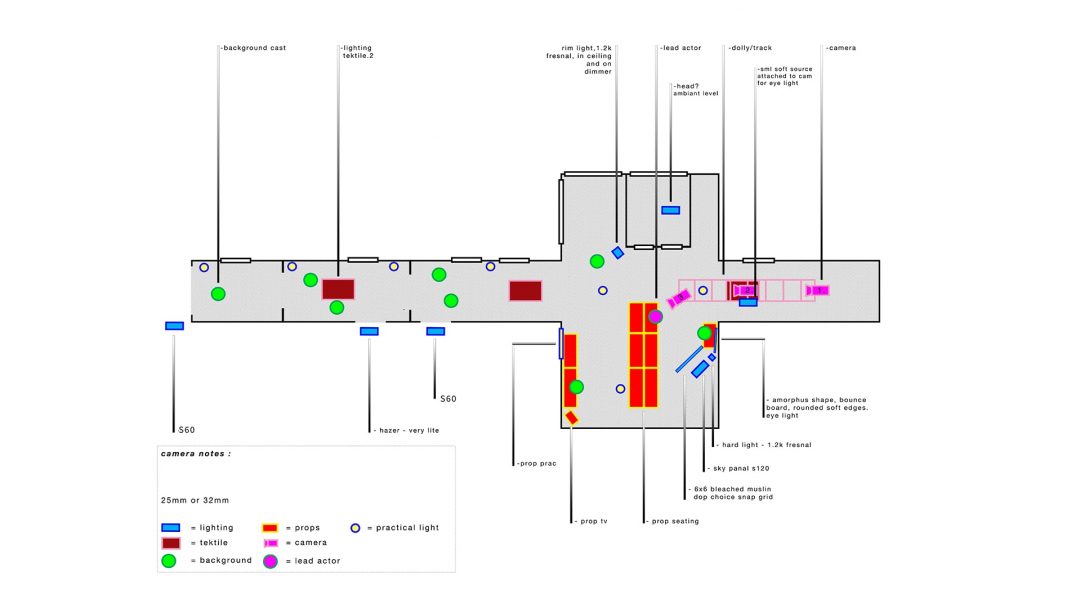 Also, Kate’s friends and family who came on to be background extras! This helped massively as she got to deliver the lines to her husband, who is her number one fan!

It was an amazing project and one that I’ll always remember for multiple reasons but mainly because it was such a collaborative project between myself and David. We always work closely together and for me, it’s like having a second voice of sense and reason! We get each other’s thoughts and understand what we’re both trying to say as filmmakers and I wholeheartedly believe that’s why we work so well together. 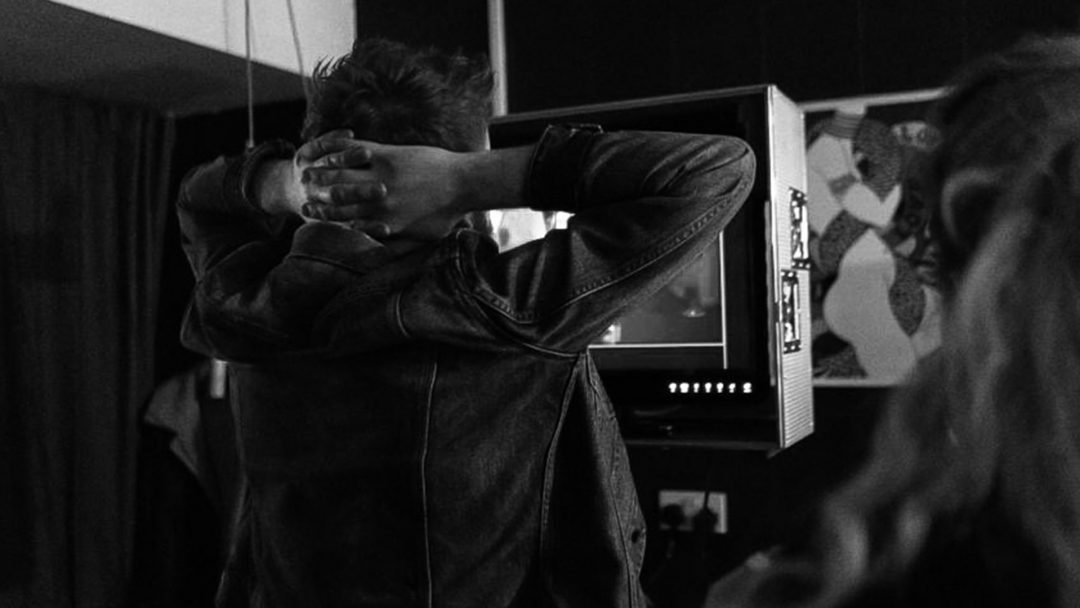 David Foulkes: Working together with Ethan on this short film was a pure, honest experience and a great palette cleanser from the commercial world. I always enjoy the collaborative process between us as I feel he has an old director’s mindset… And combined with his hunger and passion as a new director, I can feel he truly cares and pushes the human aspect and raw emotion in everything he does. I think this was perfectly illustrated within the gut-wrenching performance he sculpted with Kate.

Creating the mood for Swallow with Ethan came really naturally, we didn’t look at any references specifically for this but before the project even came up we’d been chatting about the aesthetics of Roy Andersson, Lars Tunbjörk, Rineke Dijkstraand that kinda deadpan photography quite a bit. From the script and our conversions with Kate about the performance, this felt like a great visual fit. I didn’t want to plaster anything on-top or distract from Kate’s amazing performance and the rhythm of the writing by adding anything too cinematically ‘showy’.

I was really lucky to have the help of some amazing and long-standing crew: great friend and focus puller Luke Jefferson [assisted by Chris ‘pineapple’ Orr] my constant gaffer Alex Gibbon, who has supported me on so many jobs since meeting, and Grip Jack Jackson who managed to eke out every inch of the dolly-track perfectly.

We shot on an Alexa and a 32mm Panchro, which Jason at Take 2 went above and beyond to source for us. We framed for 1.55:1 as the slightly squarer ratio fit our deadpan aesthetic and also worked beautifully for our end frame of Kate. 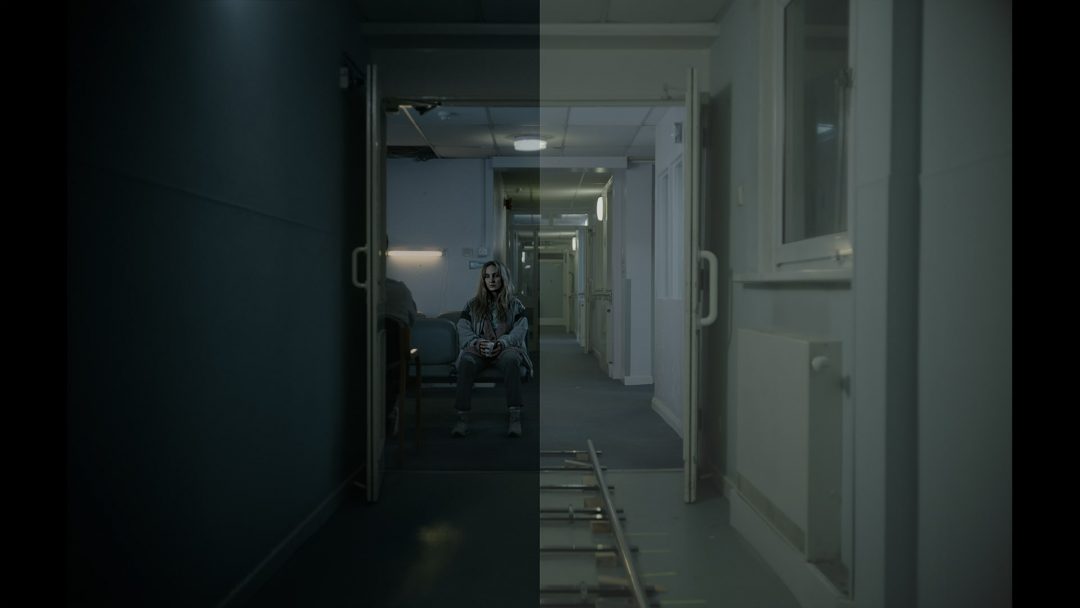 Kate Kelly: I was bewitched by the writing of swallow from the beginning, the vivid language, fractured thoughts, sometimes surreal poetic rhythm, and amusing anecdotes all told a beautiful painfully human story of a woman in turmoil that I simply couldn’t resist. I owed it to Paula’s story to play her with as much authenticity as she deserved. The text is rich so to bring her off the page I needed to find her, head and heart. We all know pain. Shame and suffering are universal but we rarely talk about it.

I discovered so much about her, not in her grief or her tragedy but through her resilience, her fight, She’s a warrior. A devoted daughter and a struggling single mother. We meet her burnt out and sleep-deprived and yet she still manages to find bittersweet humour in the face of adversity. She’s a survivor. So I chose to focus on her strength and not her sorrow to find my way into playing her.

There is a quote I love:

‘Vulnerability is not winning or losing; it’s having the courage to show up and be seen when we have no control over the outcome.’

This couldn’t be more true, not only of Paula’s story but also in the creation of just about anything.

There isn’t a road map to follow on how to play a role. Paula was no different. I learn my lines, I get to know her as well as I can, and then its time to let go of what I think I know, of any certainty at all. Stay open and curious and just see what happens. Trust that something will. Working with Ethan and David (The Creative Geniuses that they are…) allowed me to do that. My job was easy, show up and have a good time playing about in the discomfort and vulnerability of the situation. That’s not hard when your working within a totally supportive team that you trust implicitly, cast and crew included. We were all in it together doing out best to tell her story as honestly as we could. 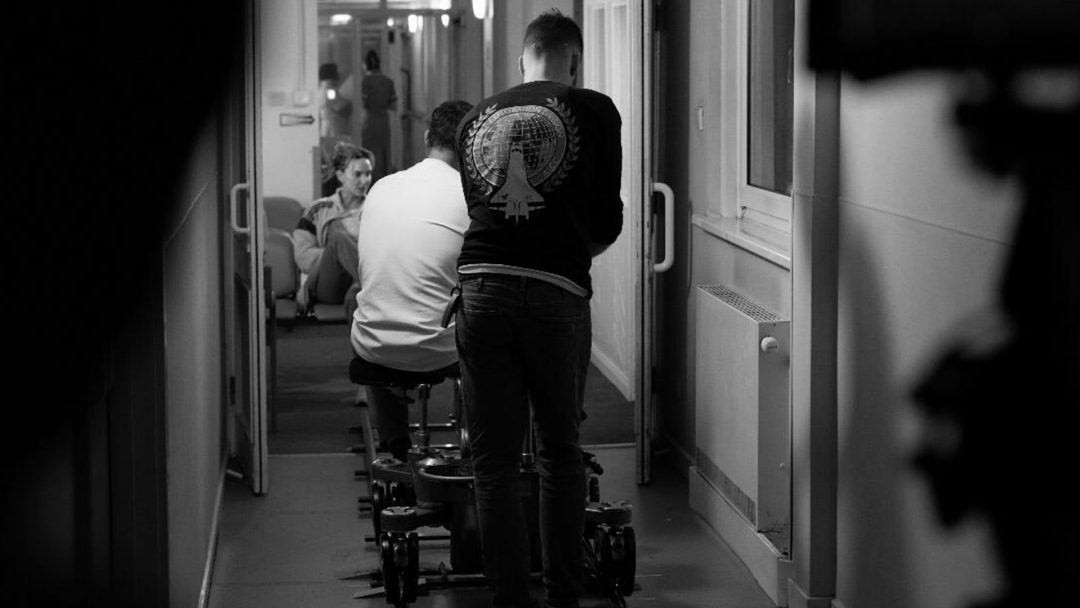 Seymour Milton: My aim was to write a musical score that somehow did justice to the emotional power of the story without drawing too much attention to itself whilst also enhancing the main emotional beats and shifts of the central character’s monologue. Her words have a musicality and rhythm all of their own so I wanted the music to be sparse, to creep in unnoticed – like the slow push-in of the camera – and to weave around the powerful central performance, building incrementally until the final climactic moments. There’s a bittersweet fragility to the strings which hopefully speaks to the poignancy of the character and her story.” 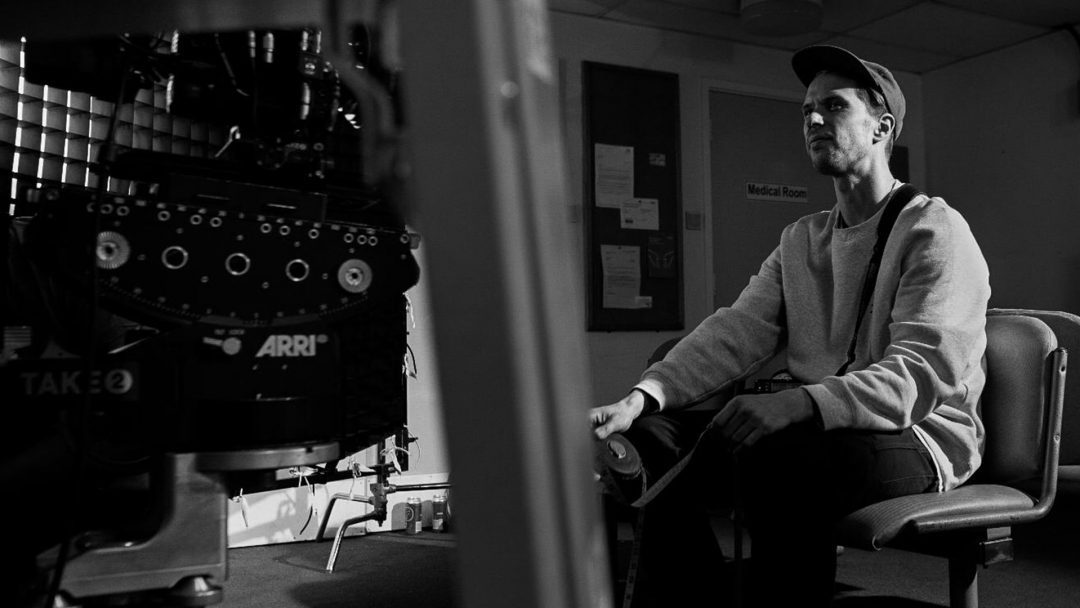