Everything You Didn’t Say

An unsettling, darkly comic look at the uncomfortable truths behind a comfortable relationship.

I’ve always been interested in the concept of monogamy, relationships, and those old romantic ideas of ‘soul mates’, and ‘love on first sight’. The film stemmed from wanting to explore what these ideas actually meant – what it is to be something so sacred to someone. What is it to be involved in a loving relationship and make it work. Why we want to make it work. I suppose the film is not necessarily just about a relationship but also what it is to be human in a relationship – two inherently flawed people striving for a perfect union.

Monogamy is beautiful at times, challenging at others, and requires a lot of give and take. It’s about communication, knowing when to be heard, and when to be quiet. But I suppose the point of the film is to say that no matter how comfortable or secure you are in a relationship, there will always be some hidden thoughts, desires or questions flowing like currents beneath the surface in varying degrees and, perhaps, that’s normal.

In a system that requires sensitivity, awareness, and some second-guessing, it felt most interesting to explore these ideas by having two characters in a relationship, speaking to each other openly whilst being completely unable to hear each other. By placing everything on the table, ‘Everything You Didn’t Say’ takes an unsettling, darkly comic look at the uncomfortable truths behind a comfortable relationship.

The intention of the film is to ask the audience, “What are you afraid to tell your partner?” and conversely, “What would you be afraid to hear?” The starting point was to literally ask real people just that. We collected real-world admissions of people’s private thoughts, desires and insecurities which formed the foundations of our script. Of course, we brought in personal experience too, but there was something quite special about having this voice-of-many, collaborative launchpad – it felt right and hopefully helps the film ring true with many different people. From here, Pete and I began writing the screenplay, working out the best way to mould these confessions and ideas into a singular story that felt true to our characters and their backgrounds, but that was encompassing the stories of all of those we asked. It was interesting to see how the nature of the dialogue naturally lead the tone of the film from a drama into the world of dark-comedy – something we embraced gladly. 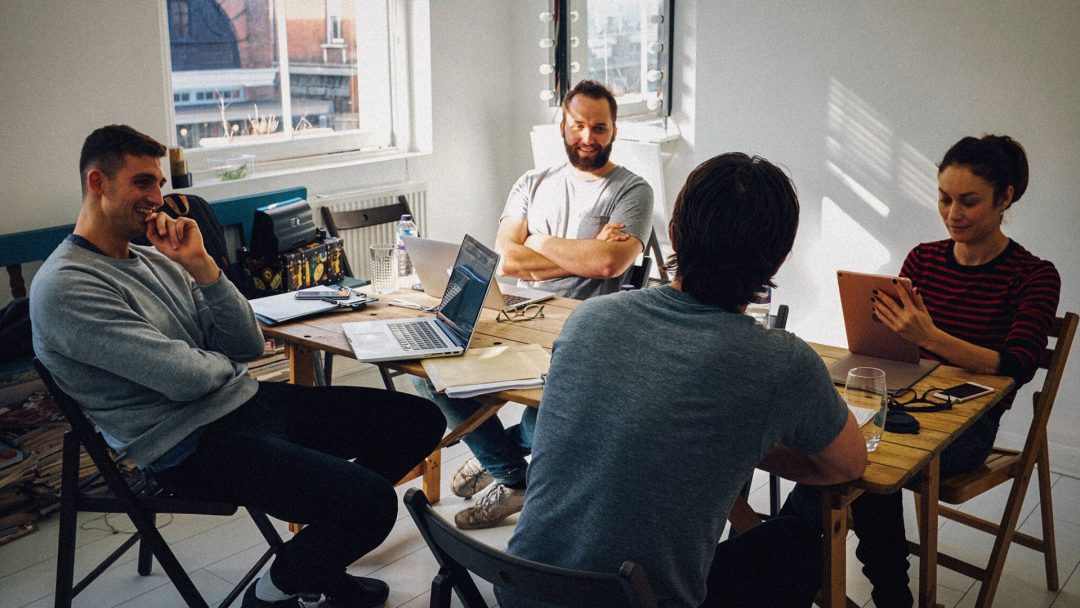 The most challenging but fun part was writing lines of dialogue that were not explicitly in reaction to the other characters’ dialogue. Whilst we were dealing explicitly with subtext in this film, we didn’t want it to be entirely clear that the dialogue was internal, so we wrote the script as if it could be a conversation, but could equally be two internal streams of consciousness flowing simultaneously. For me, in terms of direction, this was a challenging aspect of getting the performances right. Whereas usually, you might create an objective for each scene based on the spine of the story, in this film the lines of dialogue were detached from -and often unrelated to- each other; more resemblant of random thoughts that enter and leave our psyche. Therefore, it was crucial to find the emotional intention behind each individual line -not necessarily related to the line before or after it- rather than for the scene as whole. I spent time conjuring up imagery and history behind each line that I could use with Olga and Christian if needed. Of course, not being able to flow in a conversation can be challenging for actors who want to be able to bounce off of each other, listening and reacting spontaneously. We ended up re-arranging the shooting script to make sections where each character’s lines were placed consecutively -to read almost like pensive monologues- and other moments that felt more reactive, that could be performed back-and-forth more akin to a conversation. Jo Walker then did a brilliant job in the edit cutting these lines back into a conversational format, with the pace and momentum that we wanted.

Writing this film was pretty much the opposite of what one typically attempts to achieve as a writer: For EYDS we were turning subtext into the text. Coming from a background in comedy, my instinct is to lull the viewer into a false sense of security before suddenly tearing that away, hopefully eliciting a laugh – in this case using the shock factor of hearing something brutally honest or grotesque juxtaposed with two beautiful people in their lovely home having a nice meal. We all have an inner voice which, on the whole, we attempt to keep on the inside rather than blurting out and risk hurting a loved one’s feelings. But here we were, taking these moments of unspoken angst and voicing them through our characters. That was a key part of our approach to this script; we didn’t want to pull any punches. As cringe-inducing and painfully candid as some of those real-life confessions are, they could be used to reveal an innate and immediate vulnerability in the two leads. This film also allowed an opportunity to play with the inner voice in an unusual way – a feeling of “I’m fucking sick of you” is normally a parenthetical, told through an actor’s expression rather than the performer actually saying the words out loud. 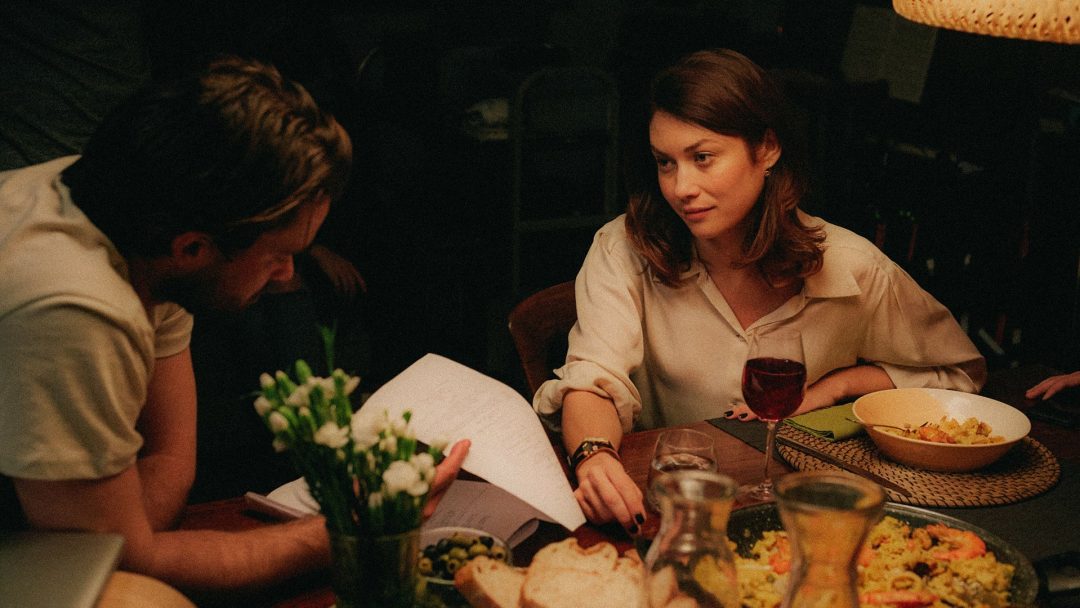 We rehearsed with Christian and Olga ahead of the shoot to ensure these brutal soundbites felt natural and had a conversational flow. This was also a great opportunity to discuss character and backstory, and really flesh out these two individuals. Most of this isn’t discussed in the film but is reflected in the performances, costumes and set design. Ultimately the film returns to ‘reality’ at the end, with a passionate embrace suggesting that there’s still love between these two characters and that, sometimes, love is enough. But there’s an ambiguity too, when Reyes (Olga’s character) opens her eyes – this subtle moment of expression sums up everything we’ve heard spoken aloud over the previous ten minutes.

It was also important to me and Charlie that this was a relationship of two differing cultures, a European and a Brit, who share a mutual feeling of sentimental affection at their past together in Murcia, Spain. Written in the lead up to the EU referendum and produced around a year after the vote to leave, Brexit hangs heavy over the film despite us deciding not to actually mention it in the screenplay. We were hugely fortunate to attract fantastic talent (from all over Europe and beyond!) to help us bring the script to life, and we’re both hugely grateful to everyone who pledged money through the Kickstarter campaign.

Everything You Didn’t Say is the kind of film I love watching and shooting, there is sometimes a phrase you often hear from cinematographers about ‘too much dialogue’ and that it’s important to ‘show not tell’ etc. What I personally really respond to is dialogue rich films (especially of the barbed variety here) where you can supplement the power of that and make it richer through visual storytelling.

The challenge here is in finding a way to differentiate the two ‘worlds’ in the film – the reality of their conversation and what they wish they could say. Doing this with a heavily different look or format is far too blunt an instrument here so it was more a case of thinking about camera movement. The immediacy of handheld vs the more controlled grammar which works with how they see themselves in those moments. 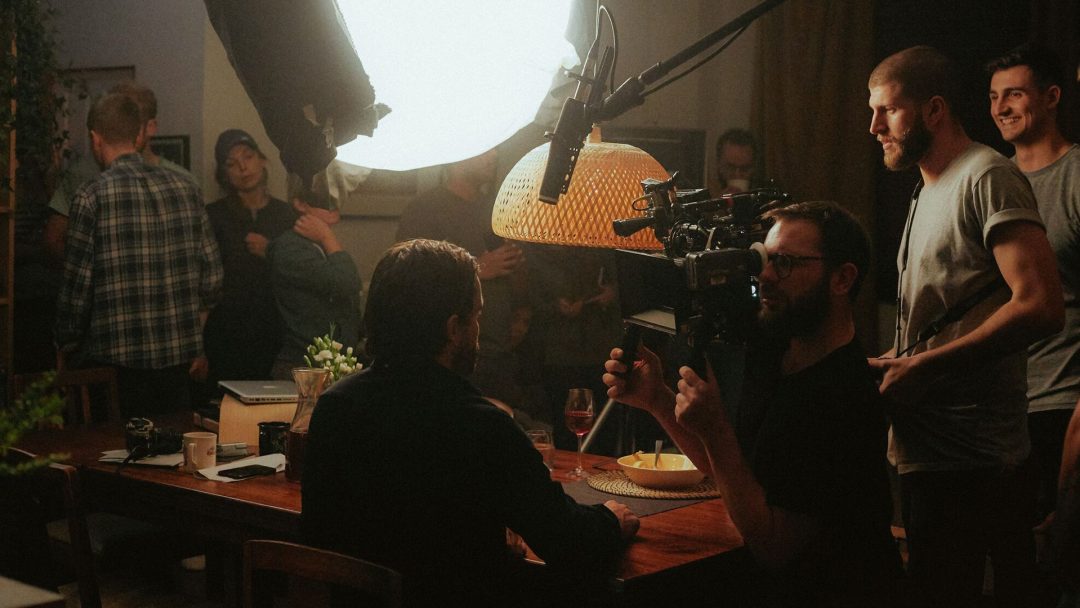 The look is one of heightened naturalism with a sumptuous warm brassiness to the image. Particular inspirations for me were ‘I am Love’, ‘Carol’ and ‘Birth’. It was lit with what I call ‘soft contrast’ supplementing practical light with soft sources but from an angle where you still have deep shadows.

It is a film where I am particularly happy with the final look of the film. It was lit relatively simply, again practically motivated (but not lit with practicals). As we wanted a warm look to the film the main lighting was two 500w lanterns wrapped in many layers of muslin. The light was wrapped in close up’s by more draped muslin and lots of negative fill. The light was supplemented with small splashes of harder light in the background with Source 4’s. This was a wonderful first collaboration with gaffer Ben Miller- a massive lover of Tungsten as am I though often flexibility pulls you towards LED….. Like so much of my work, we were generously helped by suppliers Arri Rental for the camera/grip package and Greenkit for Lighting.

I have collaborated with Toby Tomkins at CHEAT on a number of projects and I am always delighted with the results. Toby is a technical wizard in terms of teasing out an organic quality from digital images but never loses sight of the story and creative intent. As much as I strive to get as much in camera as possible in terms of contrast, direction and shape a great colourist can take it to that next level with the final touches and is a key collaborator.

Working with Charlie on ‘Everything You Didn’t Say’ was challenging and exciting. When I saw the film for the first time, it felt very solid and complete without music, yet the editing style and the prominence of the subtext in the script (what the characters ‘didn’t say’) called for a score: something that would be able to accompany the rhythm of the film, whilst defining the difference between text and subtext. A lot of the shots are closeups with strong performances and dialogue, giving a sense of intimacy and ‘melody’ which is carefully positioned in-between drama and comedy. I imagined that the characters’ lines were almost like the lyrics of a song, and I wrote the instrumental accompaniment building around the actors’ voices and the tension/release effect given by the progression of the monologues. 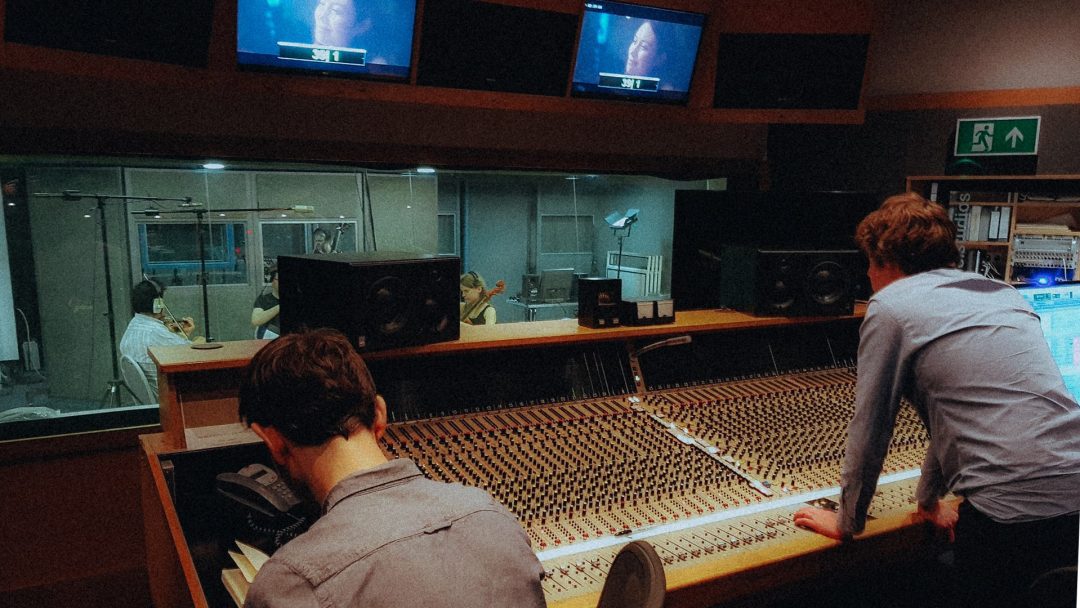 There is definitely a Spanish influence both in the instrumentation and the harmonies I used, but I was also interested in creating a bridge between the sounds in the score and the sound design, which elevated details on the screen to a psychological level (glass, cutlery, facial movements often contribute to convey the repressed frustration of the characters). For this reason, I looked for a sharp and glassy sound for some of the strings arrangements, and recording these with live musicians at Air-Edel Studios was essential to our approach. Charlie was very aware of the role of music in the film, and we worked closely throughout the scoring process, in order to find the right tone and rhythm for each of the scenes.