For our second installment, we got in touch with Danny Sangra.

Essential: Works is an interview format that Directors Library regularly hosts with film and video Directors. We ask directors to name three key and influential works under the film, campaign and music video categories. The series aims to broaden horizons of reference and acknowledge works from the back catalogue.

Check out his recent short below and work on the link.

Below are Danny’s picks and what he had to say:

My top films always juggle around. Number one always stays the same but the rest shuffle constantly. I know there’s some recent films that will become my all time favourites in as I get older.

Strangely, some of my favourite directors aren’t even in my top 5. I don’t necessarily pick films that I think are the greatest technical master pieces of cinema. It’s all about what I can watch at any moment. If you start picking the masterpieces, things start to get very obvious and the same old names come up. I have a separate list for Tarantino, Kaurismäki → and Scorsese.

Ok, I’m really over complicating this. As you can see, listing films is when my nerd levels go into over drive.

Choosing my top films is always difficult. However, number 1 is easy. I always choose Big Trouble In Little China because of the memories attached. I was 5, I remember the video store, the smell of the place and the feeling that Friday night video store feeling.

When I pick my top films I usually pick the films I can watch at any given moment. It doesn’t matter about my mood I could watch Boogie Nights on repeat.

The third pick could easily have been Seven Samurai or Bande A Parte. However, I chose Husbands and Wives because it’s had such an influence over my approach to films and the way I edit.

Growing up in the 90’s we experienced the prime era for music videos. Spike Jonze for me was the one. As much as I respected Glazer and Cunningham. Spike was who I felt I’d grown up being most influenced by. Then of course there’s Michel Gondry. People throw around the word genius too lightly these days, so I choose my words wisely when I say that I believe Gondry is a genius in his field.

Commercials didn’t mean much to me until I was in my late twenties. Guinness adverts were always talked about like they were the greatest thing in the planet. I didn’t really care about them to be honest. What got me interested in commercials was how you can tell a story in less than 30 seconds. Breaking it down to its minimum. The mechanics intrigued me.

Also I’m typically drawn to character based commercials. Roy Andersson → could be the only commercial director I am in awe of. I never knew of him when I was younger however at some point in college I found Ali Kaurismäki, who became one of my favourite directors. I connected with his humour immediately, through him I began searching for more Scandinavian humour and at some point I saw a Roy Andersson piece. I don’t even think I thought it was an advert. It felt more like a highly composed and precise short film.

I couldn’t choose my favourite Roy Andersson commercial so I plucked the one that stuck in my head the most.

2. The Water in Majorca – Heineken

I’ve always loved this spot. These are the commercials I grew with.

Growing up playing basketball, I loved sports commercials. Jordan always had the best commercials. Everyone else followed the lead. These Spike Lee as Mars spots were so on point and of the era.

In spirit of the Essential: Works series Danny also keeps a regular film diary that he shares online at the end of each month. It usually features mini marathons and is accompanied by humorous sideline observations and notes to self. They also serve as a monthly reminder that you haven’t watched as much as Danny. 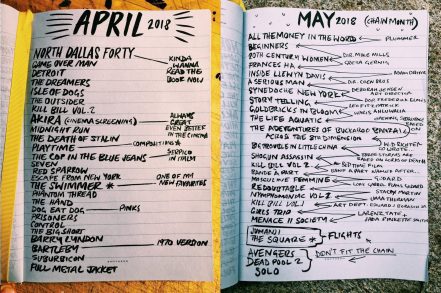 Join thousands of filmmakersGet the Newsletter.

An occasional email featuring selections of video from our shelves. We will occasionally share special announcements, projects, screenings and other site news with you. Sign up.